Sorry, You May Not Make Up The Rules

Once upon a time, 9FAM weighed at least ten pounds and was bound in take-no-prisoners hard-cover blue.  Nowadays it is nearly weightless, being composed solely of pixels (unless a consular officer spots a clandestine print copy under a senior LES's desk which, if the officer has much sense, he or she will pretend not to have noticed).

One of the many advantages of copies on paper was the ability to write clarifying - and sometimes extremely funny - notes in the margins. One of the many disadvantages was the need to change out pages regularly as things were updated, and keeping a tedious record of transmittal letters for those changes.

Now that FAM updates require zero effort on the part of consular officers, Madam simply cannot understand how some officers might get the most basic items wrong.

For example, 9FAM 42.33 N7 was last edited in October of 2011. How is it possible that an officer might understand that note in any way other than it clearly states? As in: 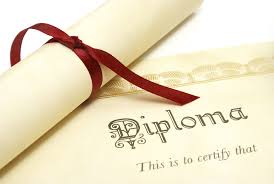 And yet Madam recently learned of a DV applicant, a high school graduate by any possible interpretation of N7, who was refused the visa solely because he had received a D in some subject or other.

Now, an interviewing officer might personally consider a D grade to be a failure of some kind, having perhaps only received As and above in his or her own high school career. But the DV and the FAM don't care about an officer's distaste for less than stellar grades. A D is a passing grade, the applicant successfully mustered out of high school, and the visa should have been issued without even a superior smirk.

Madam would hope that the officer's error was caught and corrected by his or her supervisor and the visa was issued with courteous apologies. But since she actually heard of the refusal, what are the chances of that? If the applicant can quickly find and afford a knowledgeable immigration attorney, this refusal might be only an irritant, not a life-altering mistake. But what are the chances of that?

Please play nice out there. Other people's lives matter.