Ruminations on Creativity and Innovation

In a former life, Madam was once tasked with the fairly enviable responsibility of enlarging her work unit.  She interviewed several likely candidates and hired one, but the applicant who sticks in her mind after all these years is one that she didn't hire.  This woman came with a reasonable pedigree and education, but when the unit's work was described to her she shook her head and said, "I don't know if I could be involved in such work.  I am very creative."

Here is a near-rule that Madam has developed from this and many other experiences:  When someone openly describes him- or herself as creative, he or she probably is not.  This job applicant wore a number of scarves and had that thin, aesthetic, artistic look about her, but her conventionality was painfully clear:  she saw 'creativity' not as a continuum, but as a free-standing unit untouched and unaffected by the real world.  She could not see the application of creativity to that real world, except as art to observe, or to hang on a wall.  She could not imagine the innovative possibilities of the work being done (which, by the way, the successful candidate did, and leapt into with joy and with wonderful results).

Madam might be confusing creativity with innovation, but although one sounds all artsy and the other fairly plodding, to her mind these are not two separate things.  Creative thoughts are useless if they don't or can't lead to something material.  Innovation without creativity is just Lotus 1-2-3 version 6,734,321. 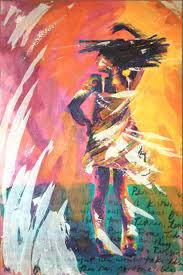 So the lesson for today might be, don't worry if you secretly would love to be considered 'creative' but don't feel conventionally so.  The proof of creativity is in genuine innovation, not in how many Indian pillows you might scatter on your sofa, or where on yourself you might glue a few sequins.  Go ahead and wear that Ann Taylor black suit or those polished black wingtips; behave yourself at meetings; learn to write cable-ese.  The proof will come when you suddenly think, "Hey, maybe we should try..."  And that kind of creativity is always welcome in the world, even, eventually, in this one.

Which leads to the second lesson on this subject.  This one can be very briefly stated, and was never explained better than by Howard Aiken, who said, "Don't worry about people stealing your ideas. If your ideas are any good, you'll have to ram them down people's throats."